So Friday is my day to help in Bren's class.
I love it and I have so fun observing
all these little people.
Nothing brings humor,
pure wide-eyed wonder
or a sense of hope
like seeing the world
through the eyes of a child. 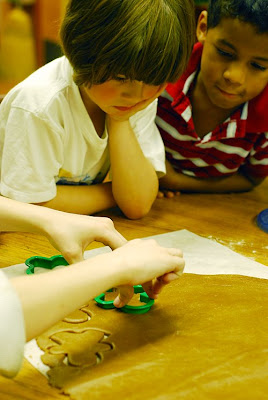 Fridays are also big buddy days.
There is a fifth grade class
that is working closely
wtih Bren's class all year.
On Fridays the 5th grade big buddies
come into the Kindergarten class and
help their little buddies do a craft.
Yesterday we made little mouse ornaments
out of felt
and we also made some
gingerbread men cookies!
60 of them.
Guess who got to roll out the dough! 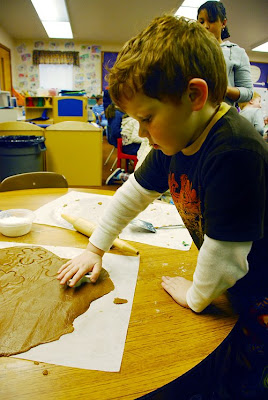 While we were busy in the classroom,
the temperature outside was
dropping dramatically.
A winter storm was in the forecast
and the icy fury could already be felt in the wind.
As one weather man put it,
this was going to be the worst arctic blast in 2 decades!
Of course.
We'd expect nothing else.
While we don't like to broadcast it for fear of retaliation,
our family tends to bring on extremes in weather!
The time that we were stationed in Connecticutt
is better known as the Blizzard of 92!
While stationed in Georgia we had to evacuate from
the first hurricane to threaten the area in over 20 years!
During our second year in California,
there was a serious drought followed by
wild fires and mudslides
which reached epic proportions
and the santa ana winds blew stronger
than they had in years!
Our one winter in Rhode Island
brought more snow to our area
than they could ever remember!
And now here we are in the Pacific Northwest
gearing up for a week long arctic blast!
It's humorous really. 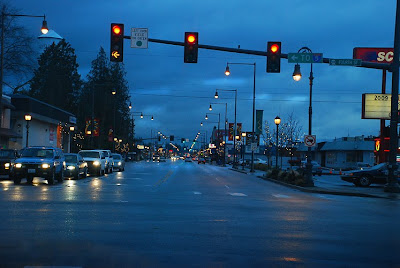 Here I am on my way to pick up Zach
from work after Bren's school let out.
It's only 3:30
and look how dark it is already.
The sky already looks snow laiden,
doesn't it?
Well, where the heck is all the snow then?
This morning there is a light dusting of
sloshy, goopy, wet snow measuring about
a half inch on our deck chair arms.
Bren keeps going out there and grabbing
handfulls to craft into little balls to store in our fridge!
Michael, who is still asleep,
will be sorely disappointed.
He has his snowboard propped up
against the wall next to the door ready to go!
There's still hope though....
more snow is in our forecast today and this week.
Maybe we'll get something that sticks long enough
for the kids to play outside.
The storm is no joke though.
The real story is the cold.
It is freezing out there,
which makes for nice icy conditions.
Nothing makes my blood run colder than
driving on slippery roads,
so I'm staying put this weekend!
We'll bake some cookies,
watch some movies and play some games.
Sounds like fun to me!

I remember the buddy thing with the older grades coming to the younger grades. I remember the whole reading buddy thing to fun, your buddy programs sound more fun. Wow that is some memorable experiences of the weather. Arctic blast makes me think of those slush drinks at DQ only they are called an Arctic rush...so good.

Wow look at that sky. I love that you took your camera just means your that much more awesome.

PS, I thought about getting a little pocket camera and while yes it may be handy, after using Oly and seeing what he can do and will continue to do as I grow with him and buy him more lenses that Oly will capture the moments that much more so that idea has pretty much left my head now.

You can keep the snow in the west we don't want it here in NJ.