Day of the week underwear is
the bain of my existence!
Whatever possessed me to buy them
in the first place
is beyond me.
I think I was tricked by the vibrant colors
and the fact that they were
on clearance
because no self-respecting mom
of a picky,
opinionated,
must have everything the way it is supposed to be
or the earth will not keep spinning,
budding speller
who is obsessed with the beginning letter of every word
would buy them if she were not
coerced!
{tr.v. co·erced, co·erc·ing, co·erc·es
1. To force to act or think in a certain way
by use of pressure, threats, or intimidation; compel.} 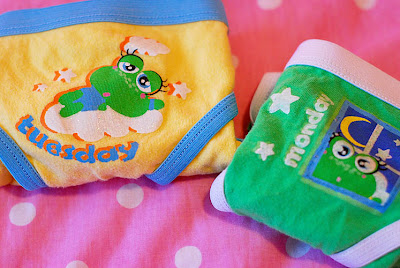 Do you know what it means to own a set of

day of the week underwear?

Well, let me tell you.

First it means that you have to keep up with the laundry.

No way around that one,

because if you miss a day or two,

or if Thursday gets lost

under the bed or behind the

not available on it's required day,

{Like today when I've got a clean pair of Friday

and Thursday is in the wash!)

you must do one of two things.

1. Convince your daughter that it is a different day than it really is.

just switch the days of the week around at will

to coincide with your clean laundry.

But, my friends, this is NOT the way to go

when the very school system that is doing so much

to give your child a great academic start

conspires against you in this case.

This may have worked last year,

but now in Kindergarten

we've crossed to point of no return.

Bren walks into class and sits down in circle time.

Bren raises her hand and proudly shouts out

After all, she and mom had just discussed this only 30 minutes ago.

Confused, but without hesitation,

"Yes, it is, because I'm wearing my Friday underwear!"

The laughter that would ensue

is easy to hear even

in this imaginary scenario.

but it would be difficult to put much faith in mommy after that one,

So obviously option number one will not work

2. Convince your daughter that Thursday is really spelled F-R-I-D-A-Y

or if she doesn't buy that,

then convince her that Thursday is pronounced Fursday.....

You get to keep your "F" and you wont miss the bus!

There would be less public humiliation,

which could save me lots of money spent on counseling later,

So, mom's of the blog world,

on behalf of your sanity,

DO NOT buy day of the week underwear

even if they are in fabulously fun colors and 75% off!

You will thank me later!

across the front of a solid white pair of undies,

which we call "blanks" and of which we have many

because Bren refuses to wear them

(unless she's modeling something that is white)

I spotted a long lost pair of disney princess underwear

in the back of her top drawer.

And we made the school bus!

Ha! So cute & Soooo true. I refuse to buy those for Sage even though she begs everytime she sees a pack! Can't wait to see the Newborn shots!

Wow I can totally see why you got the day of the week undies they are totally cute and I agree very colorful. But after reading the reasons to NOT buy them...cute has to be the last thing on the mind in this case.

thanks for giving me a good laugh this morning!XXOO

I am literally rolling on the floor! This would SO be my daughter's reaction to the whole situation being a new kindergartener and all!!!! So from one mom of a very enthusiastic kindergartener to another I say, "Thanks for the SERIOUS HEADS UP on days of the week underwear"!!!!!!!

That is so funny...having daughters 6 and 8 I can SO relate!!! Did I rhyme...must be getting old!lol