The Cutest Cake on the East Coast!!!! 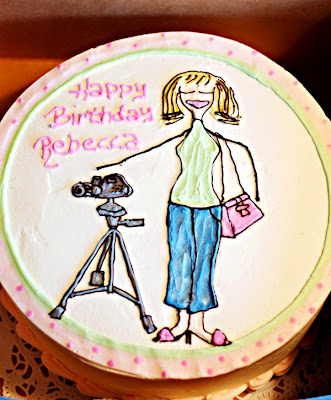 Check it out!! Isn't this the cutest cake ever?
My friend Marica stamped some cards for me for Christmas and I loved the photographer stamp she used so much that I needed to see it in icing! LOL!
I LOVE how it turned out!
The only thing that could have made it better is if I had a house full of friends to share it with.
David was able to come home for a few hours, so it was great to celebrate with my family, but a cake this fun called for a party! Maybe next year! 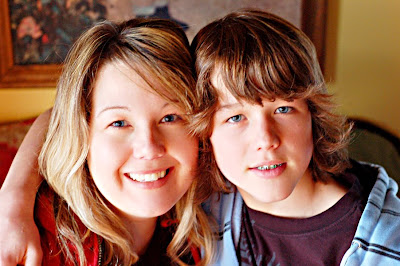 What is a birthday without the obligatory birthday photo?
So here I am at 38...with Michael, my second born sweetheart who is 14....and when asked admits that 38 is pretty old, but says he doesn't think of old when he thinks of me!
I'll take that! 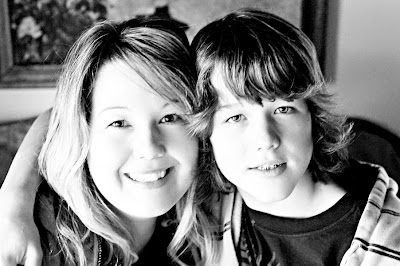 Madison shot these photos on manual all by herself. She's going to make a great photographer some day. I edited them in both color and black and white for her. 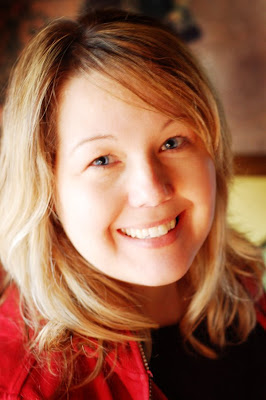 So, I'm curious, am I the only one who consciously makes an effort not to die on her birthday?
I know it sounds morbid, but the irony of it all would really just sum up my life, ya know?
I've always been a magnet for the unexpected, so it would seem fitting I guess.
It always enters my mind each year..."Hey, wouldn't it be weird if I died on my birthday?"
Then all day I try not to.
Should I go into therapy?

I'm not sure if it is the heightened awareness of my mortality on this day, but I gotta tell ya, I had more close calls while running errands this afternoon than I usually have on these narrow New England roads!


And getting through the grocery store this afternoon did about kill me!
It seems that not only am I a magnet for the unexpected, but I also attract faulty shopping carts.
But they are sneaky.
They don't become disfunctional and possessed until I've reached the point of no return and have at least four items in the basket.
The evil cart knows that it's too much of a pain to go all the way back to the front of the store to change carts, and so the torment begins.
Once I hit four, all heck breaks loose!
Like a no-nap 2 year old denied her lolli-pop, the cart loses all ability to roll forward smoothly and instead pulls considerably to one side, while all four wheels shake and shimmey in protest of my efforts to remain dignified.
If the cart had a head, it would be spinning around and spewing green stuff all over me!
Add to this picture the fact that I have developed a pretty unique limp to compensate for the limited range of motion that I have with my ankle right now, and it's not a pretty sight!
Not pretty at all.
Of course, this afternoon I had to wrangle my rebellious shopping cart from one end of the store where the ice cream was all the way to the other end of the store where the hamburger buns were and I had to do this with one good leg!
If it hadn't been for the loud high pitched squeaking of my cart that ensued midway between the Breyers and the buns,
and the intensity with which I had to grip the bar to steer that dang thing in a semi-straight line, I probably could have pulled it off with a tad bit of lady-like courtliness.
At this point, I'm seriously thinking of asking for a Priest over the PA system so he can bless the Dasani water I'm buying and I can pour it all over my afflicted shopping cart!
The louder the squeak, the harder the pull to one side, the worse my limp got and by the time I had finally reached the cashier I was red faced, breathless, white knuckled, a bit disheveled and walking like a penguin!
There I stood, flightless....my wings reduced to mere flippers.
I unloaded my 8 items onto the express lane conveyor belt and gave the cashier a warm smile, because I've learned that a sparkling personality covers a multitude of flaws,
and today I was on flaw overload!
She smiled back, out of sympathy I'm sure.
One thing about losing that walking cain and limping along instead is that people no longer look me in the eye.
They are afraid that I may have some sort of mangled, shriveled up appendage under the denim of my jeans and to stare would be rude.
I feel like wearing a sign that says, "Accidental Owner of Plate and Six Screws. Don't Worry, It's Not Contagious!",
but I can't bring myself to put the word "screw" and "contagious" on the same sign and wear it around my neck!
Do you feel me?
So, back to the conveyor belt.... after a sympathetic smile, the cashier tells me my total.
That's when it hits me....I completely forgot to transfer money from our savings to our checking!
With the best of intentions, I had transferred way too much money from our checking to our savings this month because it's been so fun to watch that number grow, and because I wanted to see it hit a certain even number...(strange , I know. Therapy again, maybe? )
I totally knew that I needed to transfer money back into checking this morning and disrupt my nice little even number financial fantasy world in order for me to get the things I needed today, but since I can't be bothered with such things on my birthday, I forgot.
At this point, I realize that I already appear a little off , so I'm not even embarrassed to ask her to point me to the nearest ATM.
I am, however embarrassed to penguin walk all the way across the store again to retrieve my cash!
I take my empty cart with me for support and of course, it is quiet as a mouse and straight as an arrow, you know, being empty and all.

I've never been happier to leave a store before in my life!
Except for maybe that time when I was in the 10th grade and I saw the boy who I had recently been dumped by holding hands with another girl in the Winn Dixie.
On the way home, convinced that the universe was conspiring to kill me on the very day of my birth, I dodged death multiple times.
I really don't believe that "the universe" can conspire to do anything, but if I did, I sure wasn't going to let it get me on my birthday! (((HUGS)) i am glad you enjoyed your day. i must say it was hard to get through this post without laughing, picturing you doing the penquin walk across the store to the atm. poor girl, i am soooo glad you didn't die- you and your quirks!!

Happy Birthday!. Sounds like it was a great day. The pics came out awesome!. Awww your post made me laugh and giggle.

So glad that you didn't die! Your a hoot to talk to

Rebecca - First off, belated Happy Birthday! I read your blog the other day and knew it was your birthday, but forgot to tell you HB in my email to you today! :)

LOVE THE CAKE! It came out so cute! Love that image and when I saw it, I knew I had to buy it so that I could make some things for you.

Finally, had to laugh at your story with the cart. I always have that same problem - getting a cart with at least one bad wheel. Glad you survived the commissary though!

Talk to you soon... maybe see you and Bren next week for a playdate?

Forgot to mention in my last comment. That cake was SO cute! Your pictures are incredible!