My dialing finger is cramping up!! 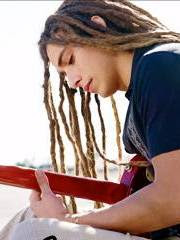 If Jason Castro goes home Thursday it wont be because of me!
I'm almost embarrassed to admit that I just spent an hour and a half voting for him and I got through every single time.
That scares me a little. Both because I got through everytime and because I voted for that long! But, in my defense, I really did have nothing better to do. I voted during my required leg elevation time.
I've never voted this early in American Idol. I usually only vote when it is down to the top ten, but I really, really want Jason to stick around and I'm worried for him tonight. I think the competition needs him and he's not shown us his best yet, so I'd hate for him to go home this soon.
I thought his performance was great, but after what the judges had to say, he might be on the chopping block.

I really enjoyed David Archuletta (I'm sure I murdered his name!) tonight! He's adorable in a big doofas kind of way, and his voice is amazing! I hope he's in the final six along with Jason Castro, David Cook (who rocked it out tonight!), Michael Johns, and two others that have yet to be determined.
I'm going to go ahead and call Robbie a rocker wannabee. He even moves like a pop singer. I see the rocker in him fading fast....but like he said...maybe he's his own brand of rocker...pop rocker maybe?
That's all the Idol I got tonight, folks!

I hope the girls do well tomorrow night!!
Posted by Becca at 11:17 PM

I so agree with you Becca!! I love Jason Castro and don't think he's shown us what he can really do yet. And he's got such a great smile! I really hope he stays for a while too!

I agree with you!! I think he is awesome, and I have a crush on him!! lol