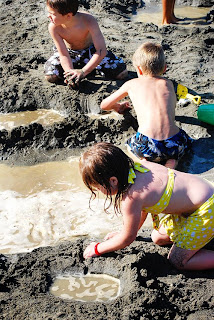 Before the kids flew out earlier this week, we spent a long day at Lake Stevens.
Bren was quite the engineer when it came to making water scapes in the sand. She makes friends wherever she goes and these two little boys played with her for hours. 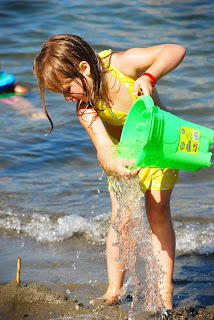 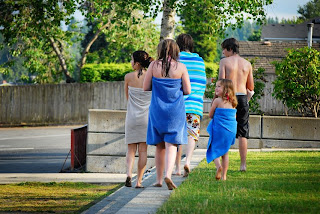 The older kids let her tag around with them a little which is always endearing,
but usually short lived.
One of them eventually has enough of her
and sends her back to her smaller playmates. 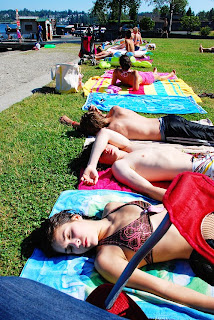 Zach and Madison tried hard to soak up as much sun as they could before their trips.
Michael, having been in Georgia for five weeks, was undoubtedly already the color of light brown sugar.
I'm sure all three will come home and make me feel like casper! 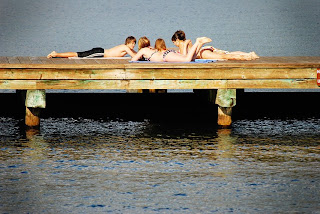 It was so great to have Sierra in town again for a nice long visit.
She and Zach wont see each other again until the Fall so they spent alot of time together. 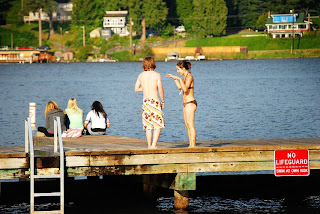 Here she is coaching Zach on how to jump over those three unsuspecting and unknown girls at the end of the pier.
We weren't sure he'd be able to clear them without kicking one of them in the head and possibly sending them for an impromptu swim, but he was determined to try. 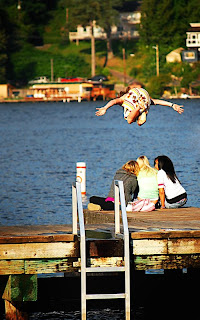 And cleared them with ease.
They weren't too thrilled though.
As a matter of fact, for three pretty girls who didn't get a drop of water on them from the stunt, they were surprisingly quite nasty about the whole thing. 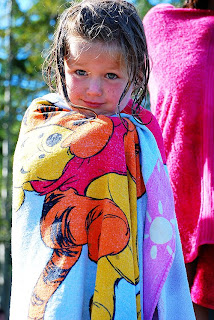 At dinner time, we drug ourselves from the lake side and headed home.
It was a fun relaxing summer day and a great way to spend time with the kids before they went off to their adventures.
I've heard from everyone and they are all having a wonderful time with family and friends.
Madison is at a folk music festival where she's sleeping in tents with her friends.
The boys helped their cousin celebrate his third birthday on Wednesday and have spent the last two days knee deep in fishing line and bait.
I miss them terribly, but Bren and I are having our own adventures.
We went to a park yesterday to play and tonight we are going to see a movie on a big screen outdoors at another park.
The movie we'll see is "Hook", which is perfect for my Peter Pan fan!

I kinda want to push them in just hearing that they were nasty about it. Heck if I were there I woulda been Dude awesome!, do it again!.

That was an amazing shot that you just nailed perfectly...Im guessing you only had one chance at the shot and again AWESOME I LOVE it.

The pic of them all chillin on the dock is pretty much left me in awe also.

Glad you got some time in with all the kids and zachs girl. Good to know they are all doing well and having fun.

Ahhh, that looks refreshing!! Especially since it's 100° here today, bleck!