must come to and end whether you want them to or not.
And so it is with Ana and Jesse's visit.
Before they left though, we had to share a day at Lake Stevens with them. 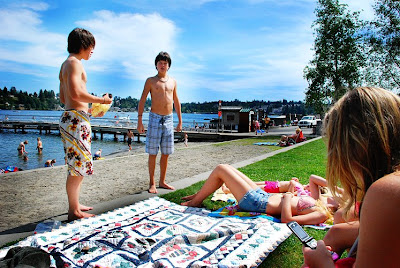 Spending Summer afternoons at lakes is a very Pacific Northwest thing to do.
It seems that everyone has a boat or a jet ski and families can be seen
packing up their coolers and beach bags on Friday nights
to spend the entire weekend
enjoying the beauty and recreation offered at the many lakes around this area. 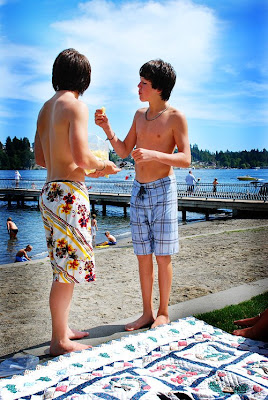 So, we had to let our Rhode Island friends experience just a taste
of a Pacific Northwest day at the lake. 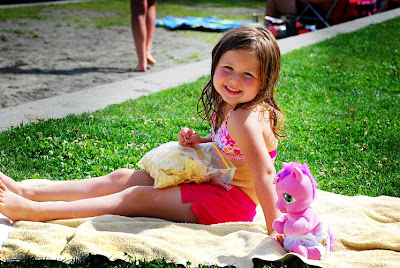 We packed our cooler full of sandwiches, chips and water bottles, grabbed a bunch of towels, a beach blanket and a bottle of sunscreen.
It's not the beach as we know it, but it serves as a nice alternative. 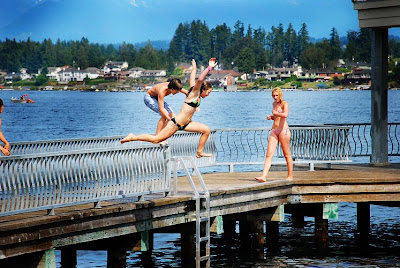 The kids had fun swimming, playing tag and jumping from the dock. 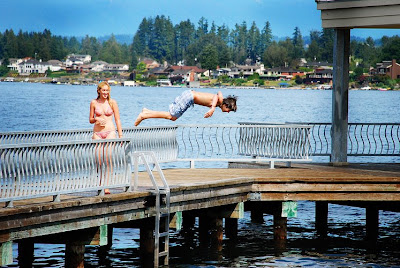 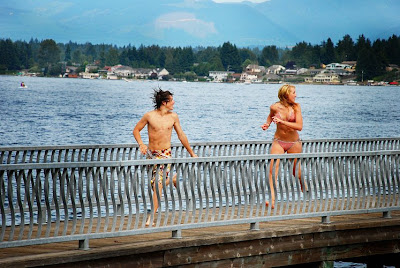 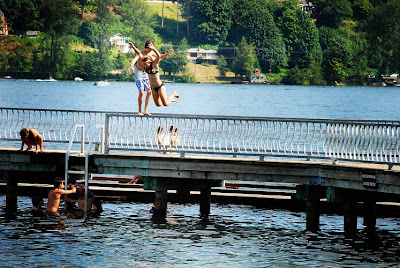 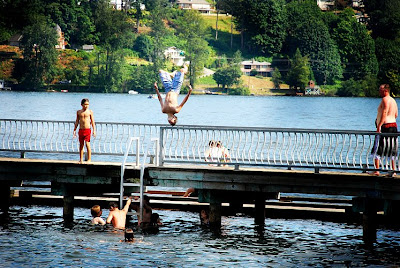 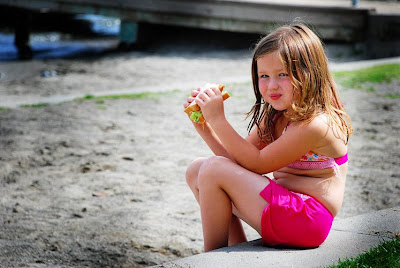 I adore picnics,
so being able to share one with so many people
in such a beautiful setting is right up my alley!
If I could,
I'd have a picnic lunch or dinner
every day of the Summer in a different fun location. 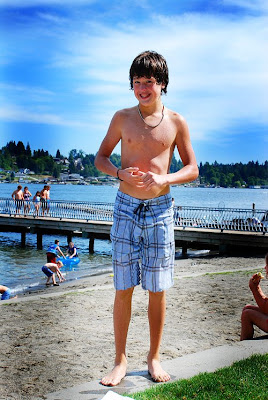 I think that Michael grew 3 inches over the 2 months that he was gone.
He's caught up to Zach now! 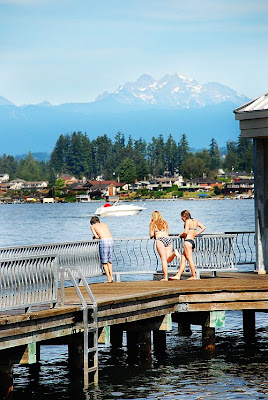 Check out that mountain in the background.
It's part of what makes this such a beautiful location.
I can't believe it still has snow on it!
I hope we get to make a trip up to the Cascades this Winter
to let the kids ski and snowboard. 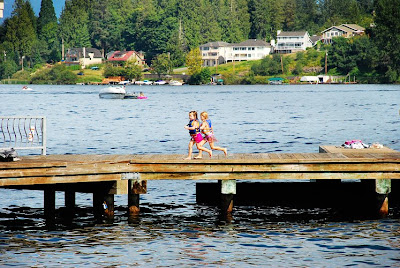 Bren found a little friend and new courage in the form of a life jacket.
She ran the docks with the big kids and had a great time. 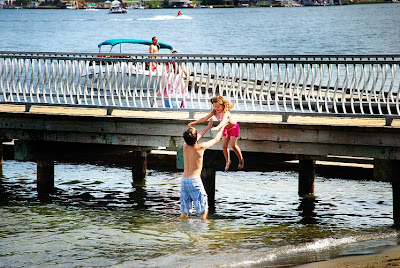 She even overcame her fear of jumping off the dock and let Michael catch her a few times.
She'll go in the water up to her chest,
but she still won't let anyone take her into the deeper water
and she wont put her head under water for long.
It's so unlike my other three kids
who were all swimming confidently in the big pool by the time they were three.
I see swimming lessons in Bren's future.
*
We had so much fun with Ana and Jesse and enjoyed their visit so much!
We went to the Evergreen state fair in Monroe on Friday night and had way too good a time to bring a camera along for.
Bren and I rode the scrambler and the swings that take you up really high in a big circle.
The older kids road every turn your insides upside down,
make your hair stand straight up on your head,
scream for your momma
thrill ride there!
We took the group to the Rock church on Sunday which was "totally sick".
We had a "Lord of the Rings" marathon movie day on Monday to avoid being outside in the rainy greyness that settled upon us that day.
I haven't worked so hard, laughed so hard or worried so hard in a long time.
Such is life with teens.....
crazy, fun, exhausting, rewarding, frustrating,
hilarious, scary, dramatic, spontaneous
and
definitely, definitely
worth every minute invested in them.

Oh to fun!!!. The one pic of Micheal the way you caught it and from looking at it, it looks like hes doing a headstand there on part of the dock.

You capture the action shots with just I dunno what it is, but the way you do it, and the moment you capture its simply break taking and you can really live that moment again and again.

And way to go Bren with jumping off into Micheals arms!. Now there is defo a shot to last a lifetime.

Becca I just adore looking at your blog. You capture MOMENTS like no other I know! so inspirational!