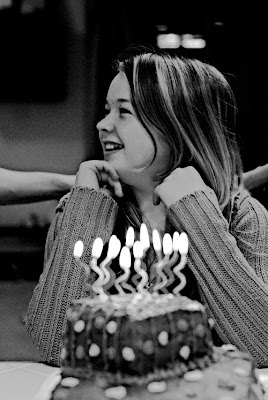 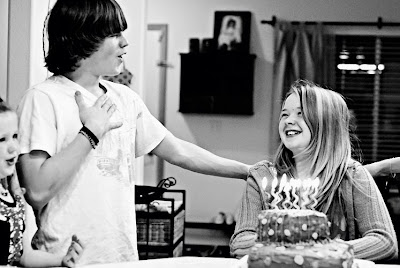 She was serenaded and smothered with kisses by her brothers. 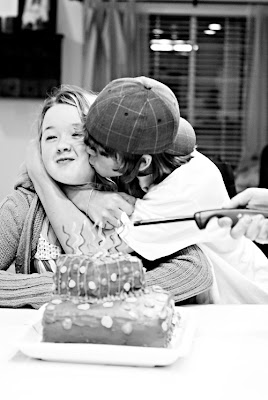 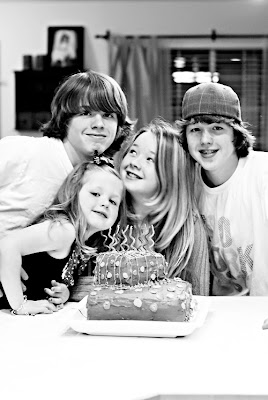 Here's all four of them looking surprisingly normal....no funny faces, tongues sticking out or crossed eyes!
It's a birthday miracle!!!! 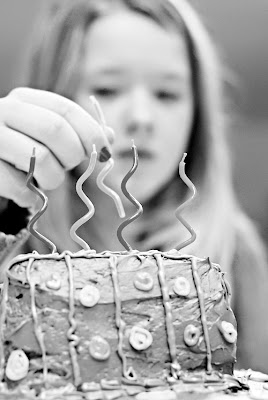 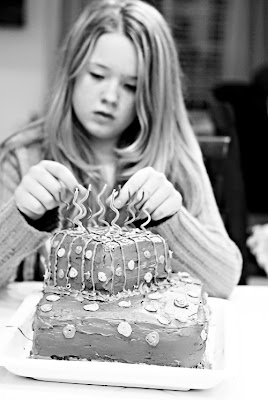 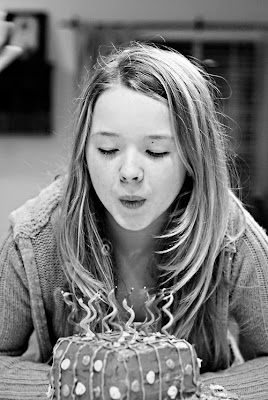 another milestone passed!
The last year before she's an official teen.
sigh.
Tomorrow night I'm taking her out shopping for an outfit of her choice and then we'll have dinner together just the two of us. 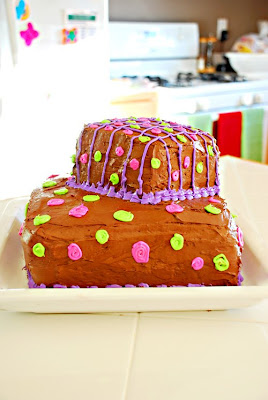 Those of you who know me well know that I am challenged when it comes to making cakes.
I just can't ever make them look anything like I envision.
I stink at icing them and they dont usually turn out very moist.
Until now....
Check this baby out!
I am sooooooo proud that it is at least in the same ballpark of what I was trying to do.
It's supposed to be a small package on top of a larger one.
The original cake was supposed to be white icing with fondant polkadots, but Madison is a chocolate loving girl, so we changed that right off the bat.
And, I've seen it on "Ace of Cakes, but what the heck is fondant exactly and where can I get it?
Appartently they dont carry it at Safe-Way or Albertsons.
So, we opted to just make our own polka dots by coloring vanilla icing and squeezing it through a round tip directly on to the cake.
At first we spent about two hours squeezing about 3 million polka dots onto wax paper and freezing them.
We thought we were so clever until we tried to get the icing polks dots off of the paper and onto the cake with out squishing them into unrecognizeable piles of colorful goo.
So, we colored a second batch of vanilla icing and went straight from tip to cake this time. Isn't it pretty?!!!
I know some of you may be snickering because clearly it is not perfect, but look at it this way.
I was making cakes that people would just look at, smile and awkwardly walk away from, and now I've made a cake that drew squeals of delight from my daughter and high praise from the men in my family.
It was yummy too!
Super moist!
My secret?
I wish I knew! 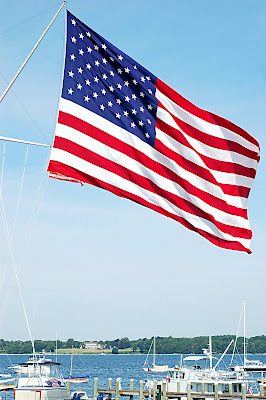 Happy Memorial Day!!!!
This morning at 3:30 am, I drove my husband to meet the airplane
that would begin his trip toward the middle east.
He'll be traveling for the next two days toward his destination in the Persian Gulf onboard the
USS Abraham Lincoln.
Our separation will be the longest that we have endured so far, almost 6 months.
I'm so proud of his willingness to serve our country and I'm thankful for him and for all of the men and women who sacrifice so much so that we can enjoy the freedom that we have here in America.
If you haven't already, let a service member know that you appreciate them this week.
Posted by Becca at 9:23 PM

Happy birthday to your daughter and to you too. 12 is a milestone. I am glad you were all together to celebrate.

Thank you to your husband and to your family for the duty of serving our country.

Happy birthday Madison!. Loving the pics, looks like a great time. I especially love the idea of you two going shopping then out for dinner. I have so much respect for how close you and the kids are. Hang onto that. Though im sure I dont need to tell you that.

God Bless America and our men and women who are serving to protect us.
Love the cake, Happy Birthday Madison.
Martha Ala. Grandmother

Oh my heart feels for you and this separation. I remember how I felt
when we were on active duty and my husband was on remote assignments. Yesterday my husband had the great honor of commissioning a new 2Lt in the USAF (our daughter's boyfriend) and it made me feel so nostalgic and proud. Freedom is not free and as you said, I'm very thankful to all those men and women.

I thought of you and your family this weekend - you are making a great sacrafice for the sake of my family (and a lot of other people) and I thank you. I'll be thinking of your family and your husband and praying for you to.

Twelve is a big birthday in our church - when you get to leave the little kids and join the teenagers in the youth group - my daughter has two months to go....and can't wait, let me tell you.

I think your cake is beautiful and clever.

I think the cake looks great! Wow, you amaze me with all your many talents. From bows, to jewelry design, photographer and now cake decorator. You continue to amaze me and inspire me! Love you!

Fondant- first of all is not very tastey, it may look pretty on the cake but will disappoint the eaters. Micheals craft store I belive carrys the stuff for future reference......Bre

Becca, tell your hubby thank you from our family!!! And thank you to you and your kiddos too! You all play such a huge part too! My hubby is in the Army, a new officer like your hubby!!! I'm so thankful he's home with us now but I know that it won't be long before he's off for another deployment. (He spent 16 months in Iraq in 03-04) Us military families have to stick together!! And military wives are STRONG women!!!

I think your cake looks yummalicious!!

Happy Birthday to Madison!
That is a fine looking cake! Good for you for continuing to try making cakes - you are obviously getting better with practice!
Have a good deployment. One day at a time!
Missy

Happy Birthday to Madison and may God bless your husband and your family.