The other day Bren and Miss K
were playing at our house.
I heard them giggling in another room
and then Miss K showed up at my side with a
worried look on her face. 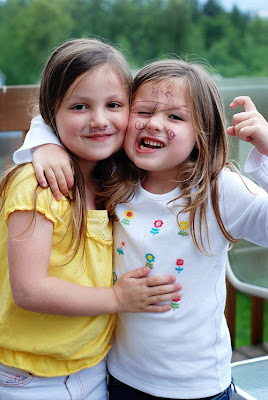 "Um, Brendell has drawn a mustache on her
face with a pen."
"She has?" my eyes grew wide with forced surprise.
"Yeah. I don't do that." Miss K replied.
"You don't?" I questioned rather sadly.
She raised her jaw and said firmly, "Nope." 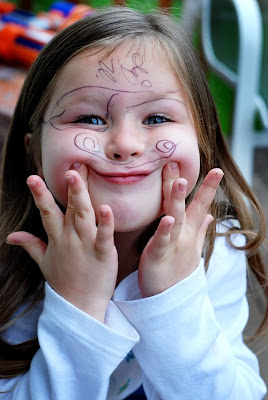 I put down my dish towel and stooped down so I could
look right into Miss K's face for dramatic effect.
"Bren is becoming a pirate," I whistpered,
"and pirates need mustaches, right?"
Miss K's eyes started to dance.
Ever so quietly she peeped,
"Can I have one too?"
I stood back up and drummed my fingers on the counter.
"I don't know, Miss K. Would your mom be upset?"
She quickly shook her head.
"No. I don't think so." she said as convincingly as she could.
"Well, Ok then, let's see what we can do."
She ran off into the other room
and I heard her asking Bren to draw a mustache
above her pooched out lips. 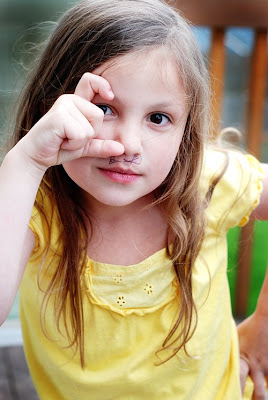 It was conservative compared to Bren's drawn on
eye-patch and curly pirate hair that she penned onto her own forehead,
but it sparked imagination and was a temporary portal to 30 minutes
of "Arg, mateys!". 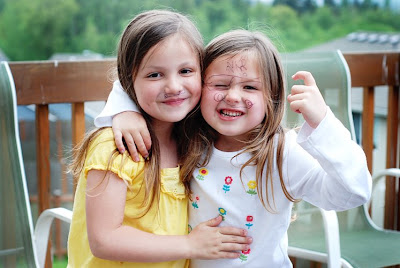 Over the last 17 years,
I have discovered that I am
"That Mom".
I am like Aunt Jodi on
John and Kate Plus Eight
giving out bubble gum
and letting kids play with playdough!
Breaking rules in exchange for smiles,
I'm quick to bring out the paint brushes and glitter
for creative rainy day projects.
If you send your kids to my house,
they might get a bit of washable marker on their hands.
I might feed them oreo cookies and milk
at 4:00 in the afternoon and
I will probably let them lick the mixer beaters
from the brownies I'm making.
I am That Mom.
The one that might not follow the rules exactly,
but true to my sanguine dominated personality,
we'll have loads of fun!
Hey, I've got plenty of soap here too!

You and me both!!

I always let my kids decorate themselves with pens, something my mom would have had a FIT about.

They're only kids for a short time, you know?

I love that you are "THAT MOM" Personally I LOVED Aunt Jodi and was sad to see her let go from the show...specially since she is family.

Looks like the kids had a blast and they aren't doing any harm, so whats a few extra minutes in the bath or a little extra scrubbing by a gentle mom hand.

yes you are that kind of Mom ,and iam proud you are ,I have seen my Grandkids have so much fun in ways which would have made me crazy! As a young Mom . Your a wonder XXOO

I knew there was a reason I liked you when I met you :)

Thanks for the nudge I needed to lighten up a little.

Isn't there a song out there called..."Let them be little?"

Good for you! We MUST get together..because if you are THAT kind of mom..then Chloe is the kid for you! She is silly, fun and LOVES oreos and brownie batter any time of the day..and she generally gets it!! LOL

I love THOSE Moms!!!! I am THAT Mom too! Life is too short to wirry about silly stuff. Children are Gods gift to us....it is a chance for us to be young & silly all over again.
I totally think we should start a "THAT MOM" group=]

Good for you :) The world needs more of Those Moms!