So I wrote a letter to a stuffed animal last night.
And not just me,
Daisy got letters from Brendell, David and Michael too.
My mom bought Brendell this bumble bee pillow pet
for Valentine's Day,
and Brendell named her Daisy.
She's been Brendell's constant pal ever since.
Yesterday, Brendell collected every box she could find in the house
and asked Michael if he would help her
make a home for Daisy.
They went up to Brendell's room
to construct Daisy's home
and came down thirty minutes later with this
cardboard condo minus the mailbox. 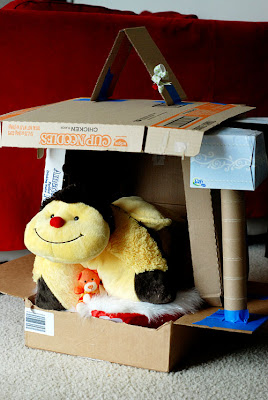 Brendell was so excited and proud

of what she and Michael had built.

Later she found a kleenex box in the cabinet

and the wheels in her mind started turning again.

Before I knew it,

she had unrolled a brand new roll of paper towels

She and Michael added it to the house

and then the real fun began. 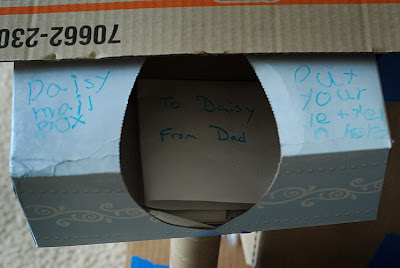 Bren handed us all paper and pens and asked us
to write Daisy letters.
Daisy now has more mail than we do!
It is amazing how much fun a kid can have
with cardboard, tape and a little imagination! 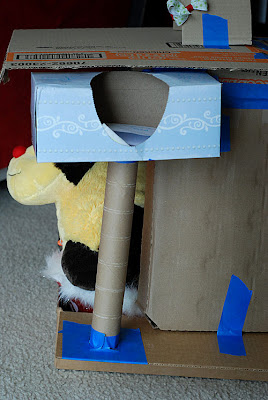 When I was about Bren's age,
I remember my parents making me
an entire cardboard kitchen.
I had a stove and a refrigerator with doors
that really opened.
We drew burners on the stove top
with red marker.
I still remember that the words
"Becki's Kitchen"
were scrawled across the front of the fridge
in my kindergarten handwriting.
Funny how I remember that taped together kitchen
more than I remember any store bought toy.
Maybe it was the uniqueness of it
and the fact that it was made exactly how I wanted it,
or it could have been that I understood
the love that went into making it.
Whatever it was,
my cardboard kitchen created a lasting memory for me.

Bren has a room full of store bought toys,
but none of them have lit up her eyes
quite as much as this box house
that she made with her brother.

I'm thinking that the creating of it,
little 3 foot 10 bundle of smiles
alongside her patient big brother
putting their creative energy together
is what Brendell will remember
someday when she's a mommy. 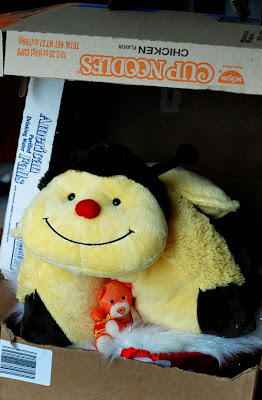 She found two more boxes in her closet this morning.
I'm expecting a second story before dinner!

My eight-year-old, Natalie, is always raiding our recycling to build new homes and condos for her stuffed animals. In fact, she has a Dirt Devil box on the dining room table right now with a door cut in it.

I love the creativity with everyday items. It just proves you don't need that many toys (although we do have an abundance).

Adorable!! I'll have to show Victoria. She wants one of these pillows for her b-day and picked the ladybug or the pig. Of course they are out of stock. Maybe she would like the bumble bee just as well?? Think Bren is up to making a small subdivision, LOL???