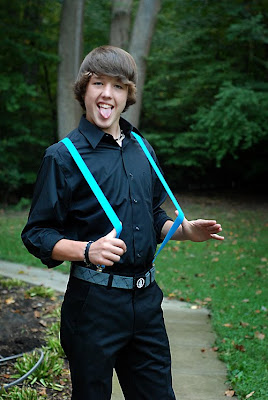 This kid is such a nut!
From the time he could talk,
he has brought so much laughter into our lives.
His comedic timing is dead on
and his humor is universal.
He's just naturally funny without
even having to try.
I was recently reminded of this when we stumbled upon
an old family website that I had built.
I hadn't posted to it since
Brendell was an infant,
but it's still there.
I have to share this story from 2001.
"The other night at dinner, one of the kids asked me how God made people.
I explained how God made Adam out of dust and then Eve from Adam's rib.
David also told them that boys have one less rib than girls.
I added that when the boys get married, it is like finding their other rib.
We told them that God had a perfect match out there for each of them
and that they would someday belong to someone just like David and I
belong to eachother.
Michael was very curious and asked, "Mom, who do I belong to?"
I told him that none of us knew right now who that girl would be but that
we would pray for her whenever we thought of it.
The next night at bedtime prayer I heard Michael say his usual
"Thank you God for everything you have done for me....."
but he ended it differently this time.
He said, "And take care of that girl that gots my other rib. Amen!"
Someday we will meet this special girl and I will tell her that Michael
has been praying for her since he was seven and boy is he
happy to have found his rib!"
*
At almost 17 years old,
he's definitely stepped up his rib search!
This story was a reminder to me to cover
both him and his future mate in prayer.
It's a very hard thing to be obedient
in a disobedient world,
but the payoff of self control is
monumental.
God has more blessings for us
than we can fathom
and his timing is perfect.
Hang in there son!
God knows who you belong to
and I'm certain that she is worth the wait!
Posted by Becca at 9:45 AM

great post Becca! Michael is handsome and I'm sure he will find his "other" rib someday. :)